Scott Washburn has been a science fiction and fantasy reader since the time he could first read. He grew up in a house filled with Heinlein, Tolkien, Niven, Asimov, Clarke and Piper stories left lying around by his father and two older brothers. He is also an avid reader of military history as well as a long-time wargamer and reenactor. So it is not surprising that when he started writing, his stories would be influenced by all of those things. Classic themes and a strong military flavor are common in his work.

Scott is an architectural designer by profession and even this factors into his stories because he demands solid plots which will stand up on their own. Solid characters are also a must in his work because he strongly believes that all stories must ultimately be about people rather than about places or things.

The three books of the first trilogy for The Great Martian War– a continuation of HG Wells, War of the Worlds.
Taking place ten years after the original martian invasion as featured in HG Wells, War of the Worlds, this trilogy contains the books: Invasion, Breakthrough and Counterattack. The United States reels under the invasion of the second wave of martian attackers. President Theodore Roosevelt enlists the brightest minds of science to help combat the alien invasion.
Also available through Simon and Schuster. 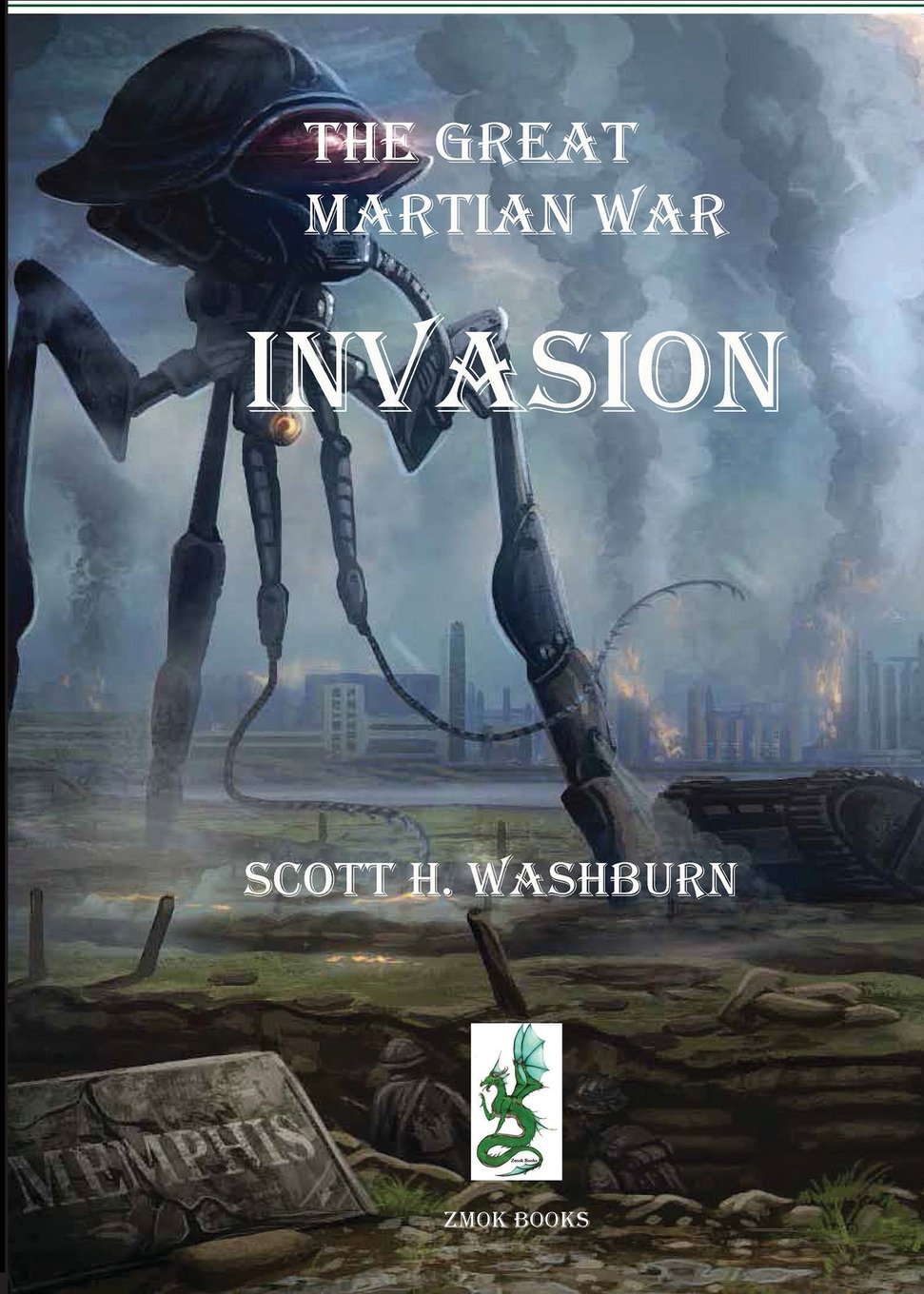 Following the defeat of the Martian invasion of Britain, a new threat to humanity lands in the American west. President Roosevelt musters the captains of industry and leading scientists to find a way to turn back the Martian tide. 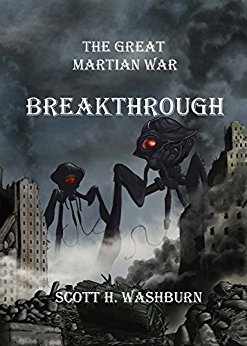 The Battle for Earth continues! The merciless invaders from the Red Planet have entrenched themselves all over the world, but President Theodore Roosevelt and the men of the US Army and Navy are focused on the aliens threatening the American heartland. As forces are rushed to meet the invader, science and industry race to build the weapons needed to match the fantastic machines of the aliens. But not all is well with the Martians as they struggle to adapt to a new world. The lines are drawn as each side prepares for what they hope will be the decisive battle. This is the second book in the first trilogy of The Great Martian War. 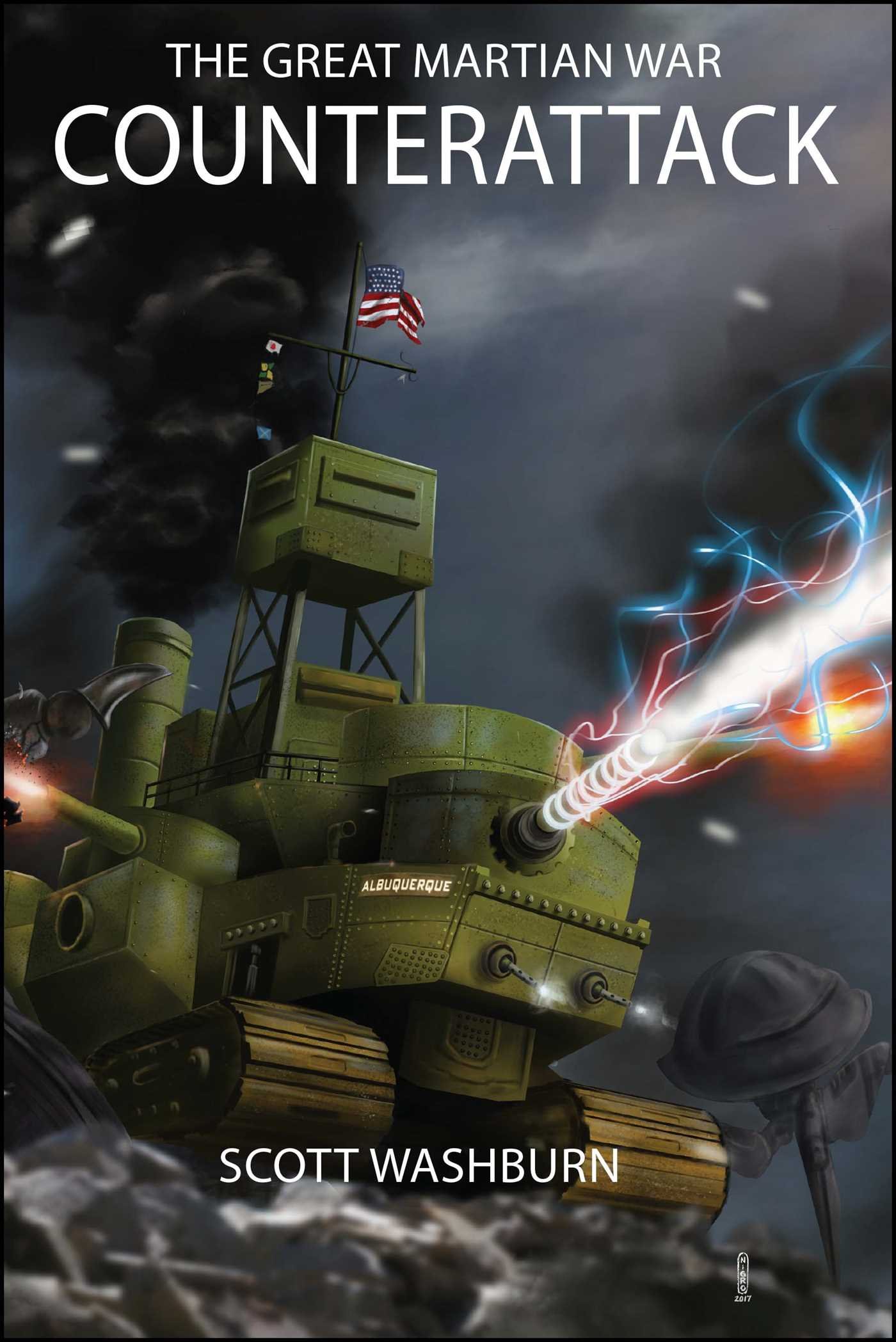 The third book in the Martian Front series, humanity fights for its existence.
As the Martian force tries to consolidate their position in the U.S., President Theodore Roosevelt gathers the best scientific minds and industry leaders to meet the Martian challenges. Staking everything on a roll of the dice, a joint army-navy force are in the midst of developing a landship to win the war. The big question is if they can complete it in time.

After the failure of their first scouting expedition to England in 1900, the Martians regrouped, developed means to deal with the deadly Earthly microorganisms, and landed again in 1908. Not just in one location, but all over the world. Their transport cylinders fell on every continent and in great number. Only England and Europe were spared this time.The first three books in the Great Martian War series dealt with the invasion in America. The Gathering Storm expands the narrative to Australia, Africa, and the Near East. The year is 1912 and the Martians have planned a vast coordinated offensive to link up their scattered conquests and assemble a force so powerful that nothing can resist it.

Co-written with Jonathan Cresswell-Jones. The Martian invaders have overrun the American heartland. Between the Mississippi and the Rockies, only Texas holds out, written off by the high command in Washington, and with revolution brewing in Mexico. Texas has become the Martians' new target. Across the Lone Star State, soldiers, Rangers, and civilians alike prepare to repel the next attack, outmatched and outgunned – yet undaunted. Governor Colquitt and General Funston plan to build their own weapons, raise their own armies, and perhaps take the war into their own hands. But the Martians may not be their only concern...

The Halfling Shires had been members of the League of Rhordia for over a hundred years. The alliance had been mutually beneficial from the start; the humans of the League received the surplus of the Shires’ bountiful farms and pastures, and the Shires received the additional security of the League’s powerful military in a very dangerous world. But recently the relationship has begun to sour. For reasons no one understands, a darkness is poisoning the once-strong friendship between the peoples. Suspicion, anger, and even violence has begun to tear the alliance apart. The threat of war, something once unthinkable, has become very real. Halfling Aeron Cadwallader, a cadet at the League’s prestigious College of Warcraft, finds himself caught between the two sides. Cast out by the League, mistrusted by his fellow halflings, he struggles to survive amidst the war that soon erupts, and find a way to help his people defend themselves against the powerful League. Broken Alliance is a story set in Mantic Games’ Kings of War universe. It is a tale of battles and magic, cruel betrayals and unexpected friendships, courage and honor. 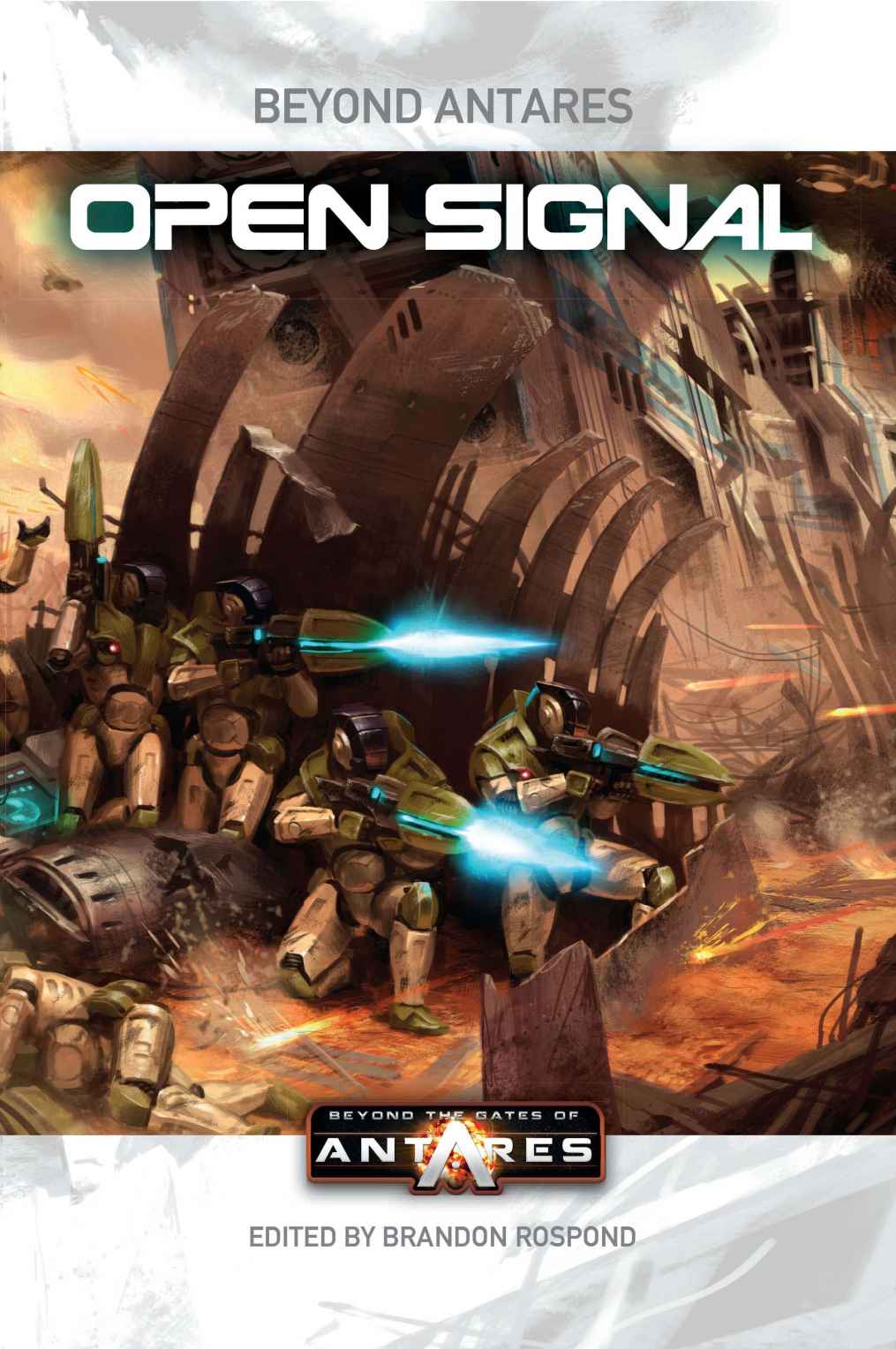 OA collection of short stories based upon the universe of the Seventh Age of Humanity and the setting for the game called Beyond the Gates of Antares. Travel through Antarean dimensional gateways to the galaxy spanning empires of the PanHuman Concord and Isorian Senatex, and to the myriad worlds of the Determinate and beyond. Board the glittering space borne cities of the Vardari, the great mercantile powers of Antarean space, and confront foes as implacable as the Ghar and as merciless as the Renegade NuHu Shards.

The kingdoms of the east have forgotten magic and replaced it with science. Now they need it more than ever…
Fires of Memory is a fantasy novel set in a world where magic has been all but forgotten. In the East, science has replaced the wizards; muskets and cannons have replaced the swords and armor of the old knights. But across the mountains, Atark, a shaman of their ancient enemy, the nomadic Kaifeng, has rediscovered the old magic and, thirsting for revenge for his murdered family, he unleashes it in a new war of conquest. As city after city falls to the invader, Matt, a young soldier, and Jarren, a reluctant scholar, desperately search for an answer to this seemingly unstoppable weapon. Meanwhile, Kareen and Thelena, two young women from different cultures, are thrown together by fate—and find that in a world drenched in blood, the only thing they can count on is each other.
Also available through Simon and Schuster.

A science fiction novel set in the far future. The new empires, which have arisen from the rubble of a devastating war, are looking with greedy eyes across the Great Rift to the untouched stars which lie there. Great riches and power will come to those who can control them. Engineer Charles Crawford has been dispatched with Terraformer Regina Nassau and a bold expedition on a ten-year voyage to establish a colony and transport gate on the far side of the Rift. But a rival power is determined to hijack the attempt and has secreted an agent in the expedition to disrupt it with sabotage and murder. With the political and military personnel dead, the task of carrying on falls to the engineers and technicians. Crawford and Nassau must mold the survivors into a force capable of resisting an enemy attack while continuing their primary task of establishing the colony and building the all-important transport gate. Their task is further complicated by the fact that the far side of the Rift is not as uninhabited as it was supposed to be. Refugees from the earlier, destroyed civilization have already made a home here and they look upon the newcomers with decidedly mixed emotions. Crawford and Nassau must try to win the trust of the natives if they are to have any hope against the coming enemy attack.

On a lovely summer evening, naval officer Robert Hancock and his daughter, Melissa, look up to see a space battle between alien spaceships taking place in orbit above Earth. Astronaut Kay Youngs and engineer Usha Vasthare have a much closer view from the International Space Station. When one of the alien ships crash lands near an American city, the main characters find themselves drawn into an ancient interstellar war. As evidence mounts that one side in the war has been manipulating humanity for decades in hopes of turning them into unwitting allies in their conflict, the humans are faced with the fact that the other side is preparing an attack to make sure there are no Earthlings left to become allies to anyone. With time running out, the humans must decide who—if anyone—they can trust and how they can best survive the coming storm.
“If you enjoy David Weber’s military science fiction, you’ll enjoy Scott Washburn’s, The Terran Consensus” – Eric Flint

The great war against the ruthless Darj’Nang Empire is nearly over. A war being fought a thousand lightyears away from where the old Star League cruiser Gilgamesh patrols a quiet border, with no chance for action or glory. But one last attack by the dying Darj’Nang leaves the high-tech ships, weapons, and machines of the Star League useless. The fate of a trillion people is suddenly in the hands of the crew of Gilgamesh. As old enemies close in to loot the crumbling League, Gilgamesh makes a desperate journey to a forgotten world to find the means to undo the Darj ‘Nang treachery – and every member of her crew must find something more within them than they had ever thought possible. 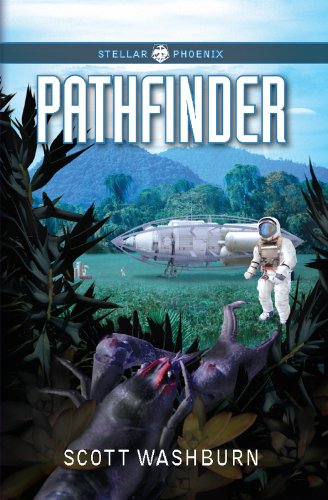 Scientist David Dysinger has a dream: to build the first faster-than-light starship. But in the 23rd Century, peoples’ dreams are realized in the virtual reality of computers rather than real life. The rulers of Earth see his starship as a threat to their own power – a threat they will stop at any cost. Deadly sabotage may leave the crew of Pathfinder marooned on a distant world. Even if they return home, they still must face enemies they didn’t even know they had. David had hoped to revolutionize space flight, but he will find himself leading a revolution of an entirely different kind…